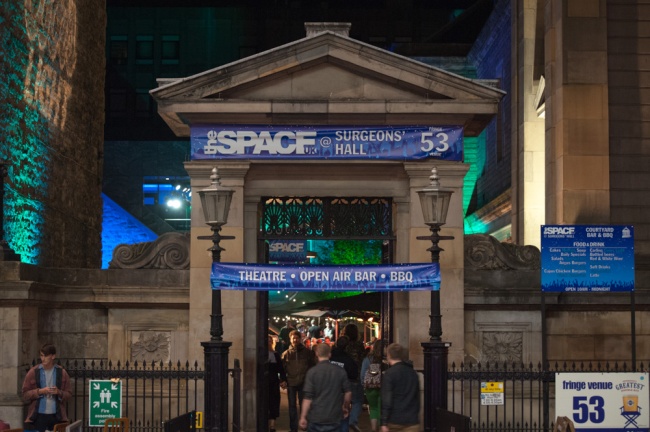 Edinburgh is now about 3-1/2 months away, and as we focus on fundraising and other plans, there is another serious matter at hand, one Team Wretch is working on every day: making sure that ‘Wretch Like Me’ fits on the stage when we present the first show on the stage of Theater Two, inside the Royal Surgeon’s Hall museum, where the show will have fourteen performances beginning August 1. For one thing, the stage is 5 meters by 2 meters, or fifteen feet by six feet. When rehearsing the play, we’ve taken to taping off a 6×15 box on the floor, and working within that. It’s not a lot of space, and Sheri Lee Miller has been working hard to to take what had once been a sprawling parade of stage-wandering clocking directions, and condensing it down into a small, more intimate, playing space.

Condensing is the word of the day, actually, because in addition to making ‘Wretch’ fit on stage, it has to fit within a very tight 90-minute window, which has to include time to set up, get the audience in, do the show, break down and vacate for the next show to come in and get ready. Given that set-up and break-down should take about 15 minutes, that give just 75 minutes for the actual show, a daunt in task, given that since launching the new version of the play last August, ‘Wretch’ has been running 105 minutes. Getting it down to size means cutting 30 whole minutes of text, which amounts to 28% of the script has to be excised. That has meant making some pretty brutal editing decisions, cutting more than just fat. The current revision has the words “The Brutal Edit” at the top of the title page, and we’ve made plenty of jokes about how fitting it will be to perform the show at the Surgeon’s Hall, given how much metaphorical blood has been shed in cutting ‘Wretch’ down to Edinburgh-size. Some major scenes have been shortened or eliminated, speeches trimmed (remember Jesse P.’ off-the-wall ‘wow-and-a-half’ prayer? gone), some characters have been merged (I now have one brother instead of two), events that were once acted out in full are now referred to in a single line, and a few beloved characters have been sent to the big editing room in the sky. One especially hard decision was made just yesterday, when Sheri and I made the difficult decision to cut one of the show’s most memorable scenes, when I accidentally almost drown a kid named Eddie during a spontaneous baptism at the beach. Though the scene showed David’s progression from newcomer to respected member of the Jesus Club, it’s detail-rich luxuriousness was actually slowing down the drive of the show at a time when it matters more to show how fast and furious David’s life is becoming. So it’s gone. For now, anyway. There will always be the non-Edinburgh version of the show, but for now, it’s important to keep our eyes on the prize, and that means making serious sacrifices now and then.

That’s part of the price of art, I have been told. And it’s a reasonable price to pay. These characters are, after all, real people, who continue to live on in my memories, regardless of whether I conflate two into one, change their accents, shorten their story-lines, or eliminate them completely. And ‘Wretch Like Me,’ in the end, is a better, faster, tighter, more engaging story because of their “sacrifice.” After years of work as a journalist, I’ve gotten used to “brutal edits” of my writing.

That’s just part of the job.