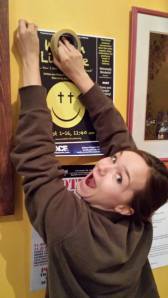 At the Fringe, where tens of thousands of theatergoers wander the streets looking for shows to see, choosing from amongst thousands of plays, musicals, come die shows, concerts and weird ‘Fringe’ things that defy description (one “show” is called simply ‘Come Heckle Christ,” while another promises to be about ‘Sex With Animals,’ or at least . . . well endowed people DRESSED like animals), the first most important element of getting an audience is making sure people see your poster. We pre-ordered 250 posters and 5000 small flyers, which we picked up yesterday at The Surgeon’s Hall, the venue we’ll officially open in on Friday.

It’s one of sever operated by TheSpace here in Edinburgh. So technically, our venue is TheSpace @ Surgeon’s Hall. Or to be simple and quick about it, Venue 53. There are HUNDREDS of venues.

To start things off, Sheri and Robin and I spent 90 minutes hauling the heavy boxes advertising material up and down windy steep stairways, delivering the required three-posters-apiece to as many other TheSpace venues as we could get to. Each TheSpace venue agrees to put up posters for the other shows in their “circuit,” so we did that, after which we were pretty much exhausted . . . and just beginning to glimpse the tip of the super-competitive iceberg that is The Fringe.

After lunch, having at last welcomed the fifth member of Team Wretch (Allo, who flew in from Boston), we hung our first poster in a restaurant near the hotel. This required first finding a store that sold tape. We’d forgotten the tape.

Then we headed down to The Royal Mile, where we witnessed a man in a straight-jacket entertaining crowds at one end of the mile, and a fellow playing awesome flamenco music on a battered guitar at the other end. In between, manic teams of actors and crew were working the street like poster-pinning locusts, taping posters to anything that looked vertical. The proper etiquette is to refrain from placing posters on any public structure, but the fringe has set up a great many huge red metal columns, and folks are permitted to put posters there.

Space on the column being limited, what people do is . . . they ignore etiquette, putting up many posters on the same columns, dominating the space, until someone else comes along and pastes up their poster right on top of the previous one. I watched someone cover up a ‘Wretch’ poster less than thirty seconds after I put it up. Of course, I had just had to cover up someone else’s poster, though being a nice guy, I chose to cover a show that already had six or seven posters up on the same column.

The most aggressive team on the mile, oddly enough, was a band of young people promoting a “family Friendly” version of ‘Avenue Q,’ working the streets, flyers in hand, with their puppets prominently displayed. While the puppets distracted people, the AQ team plastered their posters over everything, dominating the columns with their intense take-no-prisoners enthusiasm.

I know myself the volatile power of puppetry. With a puppet on your hand, you cease being yourself, you become another person, and that person might turn out to be an asshole. You never know. It’s a dangerous thing, and must be properly watched less it devolve into a dehumanizing drug-like subhuman mania.

Which pretty much sums up posturing in Edinburgh.

Today, more of the same.

Only now, we have tape.

And plenty of it.