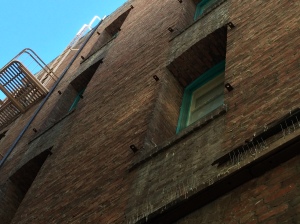 Two weeks of the Fringe now over.
That’s three performances of ‘Wretch Like Me’ begun, performed and finished at EXIT Theatre’s iconic brick build on Eddy St., with one performance left this Thursday.
It has been a great experience—though quite a different one than anticipated. On Sunday, September 13, the first scheduled performance of my show, I got a call in the early hours of the morning letting me know my Dad had passed away. I knew it was close. He’d been sent home from the hospital just two days before that, and put into Hospice care. But as technically “excepted” as it was, it was still a blow. Nine hours later, in the time honored tradition of “the show must go on,” I took the stage to do my show. I’ve written elsewhere about that experience, so I will just say that I did that show in honor of my Dad, who was always the

consummate professional, and would have been very proud of me. The next morning I left for Southern California, to be with my family and help plan the memorial. That next Thursday, following the service, my wife and I drove back to Northern California, and the next evening, I performed my second show at the Fringe. Though it all, Team Wretch’s stalwart stage manager Robin has been awesome, as has the show’s director, Sheri, who gave me some valuable advice about how to tackle a performance when so much emotion is roiling beneath the surface. And I should also thank Brittany and Amanda, at the Fringe, who have also been absolutely awesome in supporting me—a performer they barely know—as I work through performing at the Fringe during what has turned out to be one of the hardest weeks of my life.
If the performances had turned out to be a bit less than solid, I suppose I might say I had a good excuse. But I think, contrarily, they have been some of the best I’ve ever given. My goal is always to avoid trying to stand out and be too “performance-y,” instead serving as a conduit to the script, the words, the story of ‘Wretch’ itself.
I’m not the one to say if I’ve accomplished that.
But the reviews have been gratifying in suggesting that the story is standing out strong and clear.
One frequent Fringer named Sarah K. posted the following review on the Fringe Festival’s REVIEW PAGE.

“Dang, this show sure sucked me in. David exposes his vulnerability as the unpopular kid who everyone picked on, and how he found Jesus so he wouldn’t have to be lonely anymore. For a while, it seems to work – he seems to have found his people among the other members of the Jesus club in high school – but as the years go by, he finds that ‘getting closer to Jesus’ is not bringing him the ‘joy’ he is promised. There is some very subtle and potent ideas about what really brings meaning and joy in life, and they are beautifully expressed in this fantastic show. Recommended.”

And my friend Brent, who has seen other iterations of ‘Wretch,’ came out for Sunday’s show and then posted the following review.

“I’m five years older than David, and I experienced the “Jesus Freak/New Christian Youth Movement” when it was just forming in South Bay San Jose 1970-1973. The year I graduated I wondered what was to become of those lost-looking little freshmen who were being exposed to the weirdness I had not-so-deftly side-stepped during my high school years. I wondered no longer after meeting David, befriending him, then seeing his initial presentation of “Wretch Like Me” at the Glaser Center. It was nothing short of phenomenal. He took the Jesus Freak Movement much more to heart than I did, he being raised in a religious family while my mother was an avowed atheist and my father was a fallen Mormon, so David had different reasons to question than I did, but the courage to ask many questions and the commitment to exploring those questions for answers has led to this wonderful performance piece. It is full of truth and the exposure of deceit, joy and the pain of the heart, and a dedicated adherence to all the discipline and craft that theater has to offer. I highly recommend this show to anyone who has a brain, a faith and a heart who chooses to use them. Peace.”

The show must go on. This week, I go back to Southern California for Dad’s burial. As soon as it’s over, and my family engages in one final funeral-reunion-meal together, I head back home. The next night, I do my final show of ‘Wretch.’

Like all of the other others this week, I’ll be doing it for the audience.
And of course, above all else, I do it as a continuing tribute to the amazing example given me by W. Gene Templeton.

This is for you, Dad.